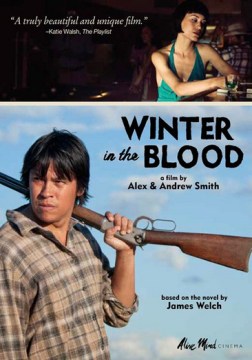 Winter in the Blood

With ghostly flashbacks and fuzzy drunkard stupor, the film explores the Native American experience, focusing on the family and social circle of a young lighter-skinned man who has always lived on a Montana Reservation. The beautiful soundtrack is a pleasant bonus to this unexpected gem. Per wiki, based on the 1974 novel by Native American author James Welch, whose parents were Blackfeet and A'aninin; he grew up on their reservations.

I liked this film and thought it warranted more than the two stars I see by the title while typing this. Adapted from the 1974 novel of the same name. Probably a little too real for folks, or too young to understand. Worth the watch.

Where are we going, Daddy?
-Guess we'll know when we've been there, huh?
===
Sometimes you have to lean into the wind to stand straight.
===
Comin' home was not easy anymore. It never was a cinch, but it'd become a torture. My throat ached with a terrible thirst. I was as distant from myself as a hawk from the moon. I was caught in the in-between space. My body was vulnerable to the spirits.
===
My big brother, Mose, and I always wanted to be cowboys. Because in the movies,
the cowboys always won. ... At least, that's what our father, First Raise, told us.
===
You gotta treat these woman rough once in a while or else they forget!
===
Why Canada? What's up there?
-It's what isn't up there that counts.
===
Those border guards love harassing Indians. They can't imagine any Indian who wants to go to Canada.
-Oh, man, you know nothing about intrigue. It is the Indian that gets harassed, right?
Yeah.
-Well-Well, the guards will be so busy badgering you, they won't pay any attention to me.

I'm First Raise's son. My father brought me here once, during the winter.
-Yes. You were just a squirt. Same as now.
They called you Yellow Calf.
-I'm called many names, but that one will do. Some call me Batman. They say that I drink the blood of cattle during the night.
My mother says you're dead.
-But I guess you're dead and you don't even know it, huh? Bein' dead isn't so bad... once you get used to it.
I'll keep that in mind.
===
He was restless. You know, he never really stayed, and he never really left altogether. Just like all these damn Indians. Was just like you.
===
I'm not a half-breed!
-We all have the blood of our enemies... in our veins. We all... have the same amount of blood.
===
Well, I hope you don't mind the rain. But you probably like it. You were always good to be with. Even on a rainy day.

Loading...
No similar edition of this title was found at FVRL.

Try searching for Winter in the Blood to see if FVRL owns related versions of the work.