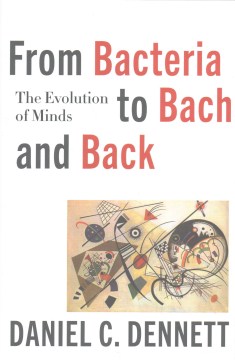 From Bacteria to Bach and Back

The Evolution of Minds

WW Norton
How did we come to have minds?For centuries, this question has intrigued psychologists, physicists, poets, and philosophers, who have wondered how the human mind developed its unrivaled ability to create, imagine, and explain. Disciples of Darwin have long aspired to explain how consciousness, language, and culture could have appeared through natural selection, blazing promising trails that tend, however, to end in confusion and controversy. Even though our understanding of the inner workings of proteins, neurons, and DNA is deeper than ever before, the matter of how our minds came to be has largely remained a mystery.From Bacteria to Bach and BackIn his inimitable style—laced with wit and arresting thought experiments—Dennett explains that a crucial shift occurred when humans developed the ability to share memes, or ways of doing things not based in genetic instinct. Language, itself composed of memes, turbocharged this interplay. Competition among memes—a form of natural selection—produced thinking tools so well-designed that they gave us the power to design our own memes. The result, a mind that not only perceives and controls but can create and comprehend, was thus largely shaped by the process of cultural evolution.From Bacteria to Bach and Back
One of America’s foremost philosophers offers a major new account of the origins of the conscious mind.

Baker & Taylor
A leading philosopher and author of Breaking the Spell offers a major new account of the origins of the conscious mind that explores the deep interactions of evolution, brains and human culture, demonstrating the role of culture in installing memes, including language, in the mind.

Baker
& Taylor
A leading philosopher offers a major new account of the origins of the conscious mind that explores the deep interactions of evolution, brains, and human culture, demonstrating the role of culture in installing memes, including language, in the mind.

For me, evolution and brain theory are certainly two among the most fascinating topics to keep thinking about. So when I realized that an author I follow, Dr. Daniel Dennett, has written about the evolution of brain and cognition itself, I promptly squeezed into my to-read list. The book demanded rigorous proactiveness from me from page 1 to the last, than most other books but that should come plain obvious given the book is about the evolution of brain and a myriad theories of proving and debunking the mind-body interplay.

However, I must say the book disappointed me at many levels. To begin with, it is exceptionally verbose and asks way more questions than it answers. The good thing about the book to me personally is that it adheres, condones, and promotes the materialistic point of view for the evolution of brain and thinking, which aligns perfectly with my opinion about the same. A perfectly put line in the book - "Animals and plants are cleverly designed to do right things at right time, not clever." - demonstrates this.  Despite that, I felt that the author drifts way too much from the main topic of the book. There is an elaborate, unbelievably detailed section about the working of an elevator, which probably is there to make a point, but is avoidable detailed. There are so many places in the book where I had this deja-vu experience again - almost to the extent of forgetting the core idea of the book.

All that said, the book is also brimming with spellbinding theories and facts about a variety of subjects that are closely or remotely associated with the evolution of the brain. To name a few - Stone Circles, Glow-in-the-dark tobacco plants that contain firefly genes in them (an evolutionary marvel), Darwin's and Turing's Inversion of Reasoning, the intellectually elite Ratio Club (of which Claude Shannon was a member), the disaster of Mars Climate Orbiter caused by using wrong units of measurement, theories for cuckoos using some other bird's nest and even rolling over an existing egg to avoid detection, the fascinating Cost Signaling Theory that describes why antelopes stot, categorization of brain into Darwinian, Skinnerian, Popperian, and Gregorian, arguments about the non-intelligent designer by highlighting why there is autumn foliage in trees but trees don't have, say, eyes, evolution of cybernetics, and by far the most interesting one - Bayesian Heirarchial predictive coding - a theory about how brain is modeled! Each one of these and a plethora of more such theories make this book a riveting read.

I believe that when it comes to natural selection, it's drastically different from a synthetic "Artificial Selection" and thus, "it's not a bug, not even a feature, it IS the product". A thought experiment and simulation would be to imagine a corporate entity (even a software company for that matter) that runs on the basis of natural-selection. There's no "intelligent designer" or "the blind watchmaker" (the C level folks) but a highly competitive selection environment that favors the most efficient workers in a natural way!

Overall, the book is a great read, although it didn't answer many of the questions I had before I started reading it.