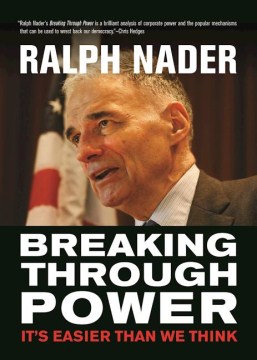 It's Easier Than You Think

Perseus Publishing
A Thomas Paine-style indictment of how wealthy corporations control politics and how average Americans, through democracy, can fight-back and win.

"Nader&;s assessment of how concentrated wealth and power undermine democracy is clear and compelling, but it&;s his substantive vision of how we ought to respond that makes Breaking Through Power essential reading. Written just before Donald Trump&;s Electoral College victory, Nader&;s latest book reads with even greater urgency now."--Yes Magazine

In Breaking Through Power, Ralph Nader draws from a lifetime waging--and often winning--David vs. Goliath battles against big corporations and the United States government. In this succinct, Tom Paine-style wake-up call, the iconic consumer advocate highlights the success stories of fellow Americans who organize change and work together to derail the many ways in which wealth manipulates politics, labor, media, the environment, and the quality of national life today. Nader makes an inspired case about how the nation can--and must--be democratically managed by communities guided by the United States Constitution, not by the dictates of big businesses and the wealthy few. This is classic Ralph Nader, a crystallization of the core political beliefs and commitments that have driven his lifetime of advocacy for greater democracy.

"Ralph Nader is the grand progressive of our time. We overlook his words at our own peril! This book is required reading."--Cornel West

"Ralph Nader's Breaking Through Power is a brilliant analysis of corporate power and the popular mechanisms that can be used to wrest back our democracy. No one has been fighting corporate domination longer, or understands it better, than Nader, who will go down in history not only as a prophet but an example of what it means to live the moral life. We disregard his wisdom and his courage at our peril."--Chris Hedges, Pulitzer-Prize winner and author of Wages of Rebellion: The Moral Imperative of Revolt

"Nader goes beyond delineating the problem and provides a critical prescription to battle the toxicity of unjust power--one that every individual can, and must, embrace."--Nomi Prins, author, All the Presidents' Bankers

"People are recognizing that our founding, fundamental values of fairness, justice, and opportunity for all--the very values that define our America--are being shoved aside to create an un-America of plutocracy and autocracy. Ralph Nader's new book Breaking Through Power provides progressive boat-rockers with inspiration and a plan for reclaiming America from the greedy Plutocrats and Fat Cats who think democracy is for sale to the highest bidder."--Jim Hightower

"I read Ralph Nader for the same reasons that I read Tom Paine. He knows what he thinks, says what he means, and his courage is a lesson for us all."--Lewis Lapham

"Nader insists on speaking up for the little people and backs his arguments and decent sentiments with hard facts."--Publishers Weekly

"This book is short, easy to read, and deserves more than five stars. Nader speaks for the average American, and backs up his arguments with facts. This is extremely highly recommended."--Paul Lappen, Midwest Book Review

About Ralph Nader: Named by The Atlantic as one of the hundred most influential figures in American history, and by Time and Life magazines as one of the most influential Americans of the twentieth century, Ralph Nader has helped us drive safer cars, eat healthier food, breathe better air, drink cleaner water, and work in safer environments for more than four decades. Nader's recent books include Animal Envy, Unstoppable, The Good Fight, and the bestseller, Seventeen Traditions. Nader writes a syndicated column, has his own radio show, and gives lectures and interviews year round.

This book is essential reading.

Back in the late 1950s, 1960s and 1970s, the Financial Elites concocted a long-term conspiracy to alter reality and slowly make the populace accept that there were no owners, just corporate ceo types. Sadly, Ralph believes this!?
[Ralph once contacted George Soros, Al Gore and one or two others about contributing money to a fund to lobby congress on behalf of climate change, erroneously believing they were actually concerned about it. Their people responded in the negative, of course! No, Ralph, they are ONLY concerned about making money from climate change - - THAT is their only interest! Nader just doesn't get it - - he understands politics to a degree, but has never understood the interplay between finance and politics, the super-rich and their minions. He still yearns for a billionaire to come and save us?!?!?!?]
Problem with Ralph Nader [who was my original motivation for devoting thousands of unpaid hours in activism] is that he goes up to the third or second level, without ever approaching the first level - - they who own everything, they who in actuality call the shots!
Ralph will write an article on the National Association of Manufacturers, without mentioning - - or knowing - - that its first president and one of its founding members was the great-grandfather of George W. Bush - - such connections are most important!
True of much of, if not everything he does - - sure FOIA was most important and much has been learned because of his contribution, but many's a time when I have had my FOIAs rejected, and found out later the g-workers were being completely dishonest.
[Example: I and others have FOIAed extensively to find out if anyone in the government was tracking jobs which were offshored, only to find in 2010, that the Obama Administration announced they were closing an office in the Executive Branch which did exactly that!!!]