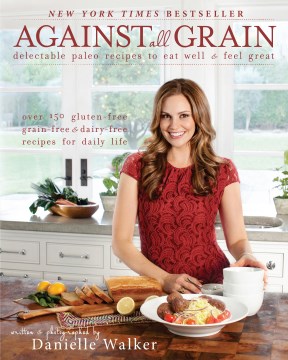 Absolutely the best paleo recipes. I've tried about 6 recipes from this book and my family thoroughly enjoyed every single one. I loved it so much my family purchased it for mothers day for me!

Whether or not you are doing a paleo diet, these recipes are delicious and approachable. Her homemade chorizo recipe is especially tasty!

I give this book 5 stars! I feel it has great recipes that focus on real food! It's not fruit heavy, and has no fake foods. Just real foods!
I love the Cauliflower Rice (which has coconut oil, cauliflower, parsley, and coconut milk), in fact every recipe I have made has been fantastic. I would highly recommend this book to anyone that is looking to spice up their Paleo recipes. These recipes have no dairy, grains and hardly any fruit. Her other book is great too, with the same quality of recipes!

REAL Paleolithic diets are MUCH better than the standard diet in America today (with the fact of its complete restriction of grains, legumes, and soy), however this author (as so many others pumping out so-called Paleolithic Diet books), they have two major problems in her approach.

Number one, as an example, it is simply impossible to have an ACTUAL Paleolithic diet that is vegetarian or vegan...

The fact is wild animals back then - like today - have significant levels of saturated fats and primitive peoples (as research has shown time and time again) prioritise on the most fatty cuts. And animal food made up 70-90% of the Paleolithic Diet..

Paleolithic is NOT low fat, nor is it primarily - much less totally (as some books even try to pursue) - plant oriented.

Sorry, but it has no archeological , anthropological, or scientific basis.

It is JUNK SCIENCE!!!

You personally may like it, but it is NOT Paleolithic!

Number two is the over emphasis on fruits and vegetables (total in this case) that so many writers have on "supposed" Paleolithic Diets.

Once the primate that became Man left the jungle, he no longer had routine access to RIPE fruits and vegetables. People with no farming or wilderness experience fail to grasp that fruits and vegetables are NOT ripe year around, and have very short time windows of when they are ripe. And Paleolithic Man had no means of preservation.

Also, the Comment as to the life span of Paleolithic Man (as shown in one of Cordain's book reviews), it appears to have been pulled out of thin air. And while the AVERAGE life span of Paleolithic Man was lower than that of today, that is because infant mortality (which was horrific back then - for both the mother and baby), infectious diseases (no vaccines or antibiotics), and accident rates of just daily life were high. That caused the AVERAGE to show abnormally low. Paleolithic populations that reached adulthood tended to live much longer, easily into 60s and longer.

This had some really nice looking recipes that made the paleo lifestyle seem appealing!