Saved Searches Advanced Search
All FVRL locations are closed to the public until further notice. Please see FVRL’s COVID-19 Public Statement for more details. We made this decision to support the overall health and wellness of our communities and the safety of our customers and staff.
While libraries are closed, you will not be able to pick up physical items that you placed on hold. Book drops are closed during the closure period. Borrowed items can be kept until we reopen. Late fines will be waived on all items during the closure.
Print 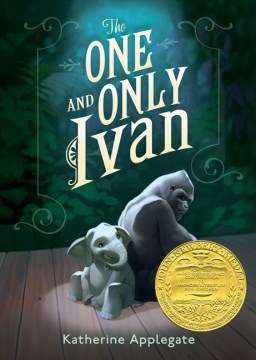 The One and Only Ivan

All Time Favourites: These books are modern classics you'll love to read again and again.

Ivan is the only gorilla at the Top Hat Zoo. This is his amazing story, based on a real gorilla, told from his perspective.

This was a wonderful story. I listened to it and the narrator did a very good job. You could picture Ivan sounding like this if he could talk to you. The stories focus is on Ivan, the gorilla, trying to save a baby elephant from the life of living in a shopping mall zoo. It is based on a true story and would be a good read for Grade 3 to adult.

A sad but ultimately uplifting story about Ivan, a lonely silverback gorilla, and his animal friends at a decrepit shopping mall sideshow. Beautifully written, tender, and lovely.

Katherine Applegate sure knows how to tell a good story. This is such a tender, heartbreaking yet heartwarming story of fighting for those you care about even when you feel like all is lost.

This heartfelt story tells the tale of Ivan a silverback gorilla who lives on display in a shopping mall. Inspired by a real gorilla, Ivan who was captured as a baby and brought to America to live in a shopping mall for 27 years of his life. Applegate has given these animals a voice, told by the point of view of Ivan, who is thoughtful and creative. He observes daily life from his enclosure and try's to understand humans and why some treat him well when others don't. Not entirely unhappy with his life, Ivan spends his time talking to best friends Stella a gentle, wise elephant and Bob a humorous stray dog. This book takes a hard look at humanity and the cruel treatment of animals. It highlights the importance of loyalty, love and friendship. Beautifully written, this book is a must read for both adults and children.

Inspired by a real gorilla who lived in a mall for nearly 30 years, The One and Only Ivan is a fictional story filled with friendship, sadness, hope, and a ragtag group of irresistible animals. During a heart-wrenching plot twist, Ivan makes a promise to an old friend that will not only change his life, but the lives of everyone around him. Despite these emotionally challenging twists, The One and Only Ivan has plenty of fun and optimism that keeps the story light, making it an excellent choice for a fun and quick weekend read. This book would be an excellent option for any animal loving reader or for anyone looking for middle grade fiction featuring animals that talk.

Based on the true story of Ivan the gorilla, who was kept in a small room as part of a mall attraction in America. This book is written from Ivan’s point of view and really brings to light how cruelly animals can be treated by humans. It does contain some descriptive parts about horrible events in Ivan’s life but it felt real without being over the top. A beautifully written book that I’d recommend for adults as well as older children.

This is such an amazing story. I'm glad I was able to listen to the e-audiobook. The reader was great and really brought the characters to life. I loved Ivan and how he did everything he could for Ruby. So Sweet!

Right up there with "Waiting for the Magic"

It's no surprise that this novel won the coveted Newbery Medal - The One and Only Ivan truly is a remarkable contribution to children's literature. I read this sad and beautiful book in two sittings, and it would have been one if pesky ol' work hadn't gotten in the way. I think this book will appeal to a wide variety of kids; the chapters are short and simply written, so they won't intimidate a tentative reader, but the story is still captivating enough to keep a more voracious reader interested. It could also be a great read-aloud option for younger kids, keeping in mind that some heartbreaking things happen to beloved characters.

Winner of the 2012 Newbery Award for Children’s Literature. I can whole-heartedly recommend this for your children. Ivan is a gorilla, taken from the jungle as a baby and raised by humans, then housed as a display animal at a small shopping mall for many years. His best friends are an old, sick elephant named Stella and a small stray dog named Bob. Ivan draws pictures with crayons which sell for $25.00 each in the mall gift shop. Life is boring and looks to stay that way, until the mall owner brings in Ruby, a baby elephant, to draw more visitors to the mall.
The story is told from Ivan’s point of view, in short, simple sentences, no more than 3 sentences per paragraph. The author is able to make that viewpoint believable and sympathetic. The gorilla sees that some humans treat him well and some treat him badly. He has an intellect and enjoys making art, but he does not seem “human.” Creating empathy with animals is a skill in writing. *The One and Only Ivan* is one of the few books since *Black Beauty* to do it so well and to seem like a realistic novel, not a fantasy. This should become a very popular novel for children, maybe a long-term classic itself.

Number1HorseLover thinks this title is suitable for 8 years and over

blacktealatte thinks this title is suitable for 8 years and over

Hiny thinks this title is suitable for 7 years and over

Divya8720 thinks this title is suitable for All Ages

erica100 thinks this title is suitable for 10 years and over

Aqua1633 thinks this title is suitable for 8 years and over

LifeLoverSam thinks this title is suitable for 9 years and over

She's far away, belly deep in tall grass with others by her side.
Ruby.
"She's here, Stella," I whisper. " RUby's safe. Just like I promised."
I call to Ruby but the wind tugs at my words and I know she'll never hear me.
Still Ruby pauses for a second, her ears spread wide like tiny sails.
Then, with lumbering grace, she moves on through the grass.

I miss my old cage.

I miss my art.

But most of all, I miss Bob.

My belly's cold without him.

"But here, I had no one to protect"

"I gaze at the huge, shadowy box, and suddenly I understand how Ruby feels. I don't want to go into that box.

The last time I was in a box, my sister died."

Bob, who has been chewing his tail, pauses, tilting his head. "Is that a true story?"

"I always tell the truth," Stella replies. "Although I sometimes confuse the facts."

In my new life as a human, I was well tended. I ate lettuce leaves with Thousand Island dressing, and caramel apples, and popcorn with butter. My belly ballooned.

But hunger, like food, comes in many shapes and colors. At night, lying alone in my Pooh pajamas, I felt hungry for the skilled touch of a grooming friend, for the cheerful grunts of a play fight, for the easy safety of my nearby troop, foraging through shadows. . . .

Sometimes I lay awake, wishing for the warmth of another just like me, asleep in a night nest of tender prayer-plant leaves.

I liked having sips of soda poured into my mouth like a bubbling waterfall. But every now and then, I longed to search for a tender stalk of arrowroot, to feel the tease of a mango, just out of reach.

"The One and Only Ivan" is a novel by Katherine Applegate. Ivan is a silverback gorilla who lives in a stationary circus. Ivan is good friends with the other animals in the circus, especially Stella the elephant and Bob, a stray dog. When Stella dies, Ivan makes a promise to save her young friend, Ruby, from a life of captivity. It takes some time, but Ivan and Ruby are eventually moved to a zoo. "The One and Only Ivan" is a book of great courage and hope.

Having spent 27 years behind the glass walls of his enclosure in a shopping mall, Ivan has grown accustomed to humans watching him. He hardly ever thinks about his life in the jungle. Instead, Ivan occupies himself with television, his friends Stella and Bob, and painting. But when he meets Ruby, a baby elephant taken from the wild, he is forced to see their home, and his art, through new eyes.

This book is told from the point of view of the gorilla Ivan. Ivan is treated as a means for income and certainly not a respected animal of God's creation. Applegate's story tells of Ivan's friendships with the other animals in this shopping mall mini-circus.

Basically what we have here is Charlotte’s Web if you took that tiny spider and replaced her with a 300-pound gorilla. Which, to be frank, would normally bode badly for said gorilla. And certainly badly is how Ivan, the titular hero of this tale, bodes when you consider that he is trapped in an off-highway mall circus. Ivan’s never questioned his fate seriously, considering that he’s been there for twenty-seven years. Then one day Mack, the owner of the mall, decides that the only way to drum up more business will be to buy a new resident. There’s already Ivan and Stella, the elephant with an injured foot that doesn’t seem to be getting better. To this mix comes Ruby, a baby elephant not long captured from her home in the wild. Thanks to Ruby, Ivan sees that this is no place for a baby of any sort and he must use all his brains and intelligence to find a way to save not just her but himself as well.