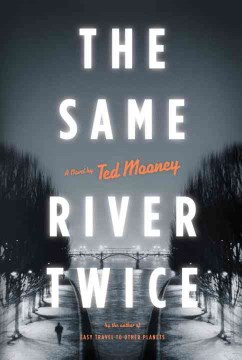 Random House, Inc.
When Odile Mével, a French clothing designer, agrees to smuggle ceremonial May Day banners out of the former Soviet Union, she thinks she’s trading a few days’ inconvenience for a quick thirty thousand francs. Yet when she returns home to Paris to deliver the contraband to Turner, the American art expert behind this scheme, her fellow courier (previously a stranger) has disappeared, her apartment is ransacked for no discernible reason, and she has already set in motion a chain of events that will put those closest to her in jeopardy.

Odile’s American husband, Max, has no inkling of her clandestine moonlighting. An independent filmmaker whose recent taste of commercial success has left him at a crossroads in his career, he by chance makes a surreal discovery: unauthorized copies of his first film, with a technically expert, and completely different, ending. Baffled as to who would have either the motive or the means to commit such intellectual piracy, he investigates this fraud and soon runs up against the Russian mafia and, possibly, a human-trafficking operation. At the same time, he is becoming ever more preoccupied by his next artistic project: filming the actual lives of people intimate to him and Odile, a Dutchman and his American girlfriend who are meticulously restoring their century-old houseboat on the Seine—an endeavor that has fervent meaning for both Max and his subjects. And as if this weren’t excitement enough, he begins to suspect that Odile is having an affair.

Marital deceptions deepen and multiply even as the details of Odile’s and Max’s escapades appear ever more connected. The couple must now confront exactly what they are willing to do for the sake of their marriage and, indeed, their lives. Meanwhile, Turner, too, has a great many irons in the fire, which suddenly threatens to burn out of control.

Hugely atmospheric, perceptively written, and grippingly suspenseful, The Same River Twice is a page-turner that also poses questions of existential importance. What is the nature of inevitability? What agency do we have over our destinies? And is a different ending ever possible?

Baker & Taylor
After she helps smuggle Communist folk art out of the former Soviet Union clothing designer Odile finds her life taking a dangerous turn, just as her husband encounters the Russian mafia while working on his latest film project.

Baker
& Taylor
After she helps smuggle Communist folk art out of the former Soviet Union French clothing designer Odile finds her life taking a dangerous turn, just as her husband brushes up against the Russian mafia while working on his latest film project. By the author of Singing Into the Piano.

"The business with Odile would have to be faced ... A man lied by fabricating false truths, a woman by omitting real ones. This tactical difference not only made women superior liars but also required the serious man to work against his own inclinations if he hoped to determine where matters actually stood. How strange, thought Max, that he knew this in his films yet so often forgot it in life. ... (p. 638)

This thriller set in contemporary Paris and Belarus has a complex plot and plenty of action but the reader has to wade through pages and pages of moralizing as the author explores the minds and consciences of his characters. Good gracious, it takes a character, shot in the chest, four pages to die (while he thinks about it)! The author's style is very cinematographic and the main character, Max, is a videographer who is making a film of another character in the plot (Rachel).

"Odile's trip to Moscow, the subsequent trashing of their apartment, the firebombing of the 'Nachtvlinder' [yacht], the altered version of 'Fireflies' [a low-budget movie], La Peau de l'Ours, Turner and the Giacometti [print], Broch's murder and the confiscation of Madame Leclere's files, the amber-coasted DVDs, Veronique, the CRS raid on the 'Nachtvlinder, his wife's affair - all these glittered in the mind's eye like shards of broken mirror, each reflecting one or two of the others but refusing to come together into a whole. If there'd ever been a whole. If it had ever been a mirror." (p. 630)