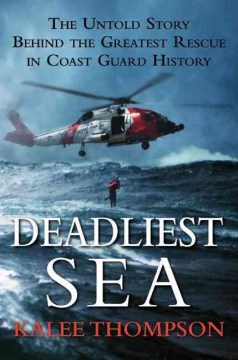 The Untold Story Behind the Greatest Rescue in Coast Guard History

Baker & Taylor
Relates the story of the stunning Coast Guard rescue of members of a sunken fishing trawler in the freezing Bering Sea, an effort that was unprecedented in its success, despite gale-force winds, high waves and formidable darkness. 75,000 first printing.

Deadliest Sea by Kalee Thompson is the spellbinding true story of the greatest rescue in U.S. Coast Guard history. Recounting the tragic sinking of the fishing trawler, Alaska Ranger, in the Bering Sea and its remarkable aftermath in March 2008, Deadliest Sea is real life action and adventure at its finest. The full story of an amazing rescue—where extraordinary courage, ingenuity, will, and technology combined in one of the most remarkable maritime feats ever recorded—has never been told before now. It’s The Perfect Storm meets Deadliest Catch.

Book News
Commercial fishing is the most dangerous job in the United States, with a death rate 36 times higher than for all other US workers. Veteran journalist Thompson offers a fascinating look at the Alaskan fishing industry in this book-length account of the March 23, 2008 sinking of the Alaska Ranger fishing trawler in the frigid Bering Sea, the Coast Guard's dramatic rescue of its crew, and the formal investigation into the loss of the ship that followed. Thompson is a freelance writer specializing in science, the environment, and the outdoors, and a former editor at Popular Science and National Geographic Adventure. Portions of the text appeared in slightly different form in the July 2008 issue of Popular Mechanics. No subject index. Illustrated with b&w photographs. Annotation ©2010 Book News, Inc., Portland, OR (booknews.com)

Baker
& Taylor
Soon after 2:00 A.M. on Easter morning, March 23, 2008, the fishing trawler Alaska Ranger began taking on water in the frigid Bering Sea. While the first mate broadcast Mayday calls to a Coast Guard station more than 800 miles away, the men scrambled to inflate life rafts. By 4:30, the wheelhouse was just barely visible, and most of the 47 crew were in the water, wearing the red survival suits--many torn or inadequately sized--that were supposed to keep them from freezing to death. Two Coast Guard helicopter rescue teams battled snow squalls, enormous swells, and gale-force winds. Before dawn, the Coast Guard had lifted more than twenty men from the freezing waves--more than any other cold-water Coast Guard rescue in history. This book recounts the harrowing stories of both the rescuers and the rescued, and investigates the negligence that leads to the sinking of dozens of ships each year.--From publisher description.
Relates the story of the stunning Coast Guard rescue of members of a sunken fishing trawler in the freezing Bering Sea, an effort that was unprecedented in its success, despite gale-force winds, high waves, and formidable darkness.

Amazing book - shows how desparate some companies are for money, and people are for good pay despite atrocious safety concerns! But describes in detail how the Coast Guard saves people under the terrible conditions of the Bering Sea. Also the reader becomes aware of how dangerous it is for the people who procure our fish supply, even in the United States.

An excellent non-fiction read. In fact, reads as well as a thriller novel.

Kalee Thompson's narrative had me hooked to stay up into the wee hours of the night to read. I could close my eyes and picture what was happening.

A very unfortunate event that had very heroic moments and the Coast Guard efforts must be commended.