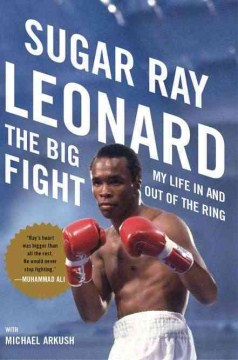 My Life in and Out of the Ring

Penguin Putnam
In this unflinching and inspiring autobiography, the boxing legend faces his single greatest competitor: himself.

Sugar Ray Leonard's brutally honest and uplifting memoir reveals in intimate detail for the first time the complex man behind the boxer. The Olympic hero, multichampionship winner, and beloved athlete waged his own personal battle with depression, rage, addiction, and greed.

Coming from a tumultuous, impoverished household and a dangerous neighborhood on the outskirts of Washington, D.C., in the 1970s, Sugar Ray Leonard rose swiftly and skillfully through the ranks of amateur boxing-and eventually went on to win a gold medal in the 1976 Olympics. With an extremely ill father and no endorsement deals, Leonard decided to go pro.

The Big Fight takes readers behind the scenes of a notoriously corrupt sport and chronicles the evolution of a champion, as Leonard prepares for the greatest fights of his life-against Marvin Hagler, Roberto Duran, Tommy Hearns, and Wilfred Benitez. At the same time Leonard fearlessly reveals his own contradictions and compulsions, his infidelity, and alcohol and cocaine abuse.

With honesty, humor, and hard-won perspective, Leonard comes to terms with both triumph and struggle-and presents a gripping portrait of remarkable strength, courage, and resilience, both in and out of the ring.


Baker & Taylor
The International Boxing Hall of Fame icon shares the story of his rise from impoverished origins to become a national Golden Gloves champion, Olympic gold medalist, and top-rate pro, discussing his professional relationships, exposure to sports corruption, and struggles with addiction.

Baker
& Taylor
The International Boxing Hall of Fame icon shares the story of how he rose from impoverished origins to become a national Golden Gloves champion, Olympic gold medalist and top-rate pro, offering insight into such topics as his professional relationships, exposure to sport corruption and struggles with addiction. 75,000 first printing.

Sugar Ray toots his own horn in this autobiography, but I guess that is what autobiographies are about.