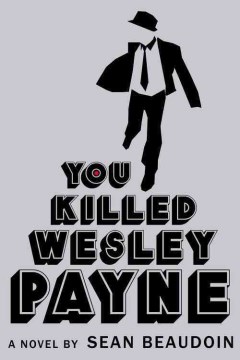 Grand Central Pub
He's come to do a job.
A job that involves a body.
A body wrapped in duct tape found hanging from the goal posts at the end of the football field.

You Killed Wesley Payne is a truly original and darkly hilarious update of classic pulp-noir, in which hard-boiled seventeen year-old Dalton Rev transfers to the mean hallways of Salt River High to take on the toughest case of his life. The question isn't whether Dalton's going to get paid. He always gets paid. Or whether he's gonna get the girl. He always (sometimes) gets the girl. The real question is whether Dalton Rev can outwit crooked cops and killer cliques in time to solve the mystery of "The Body" before it solves him.

Sean Beaudoin (Going Nowhere Faster, Fade to Blue) evokes the distinctive voices of legendary crime/noir authors Dashiell Hammett and Jim Thompson with a little bit of Mean Girls and Heathers thrown in for good measure. It'll tease you, please you, and never ever leave you. Actually, that's not true. It's only a book. One that's going to suck you in, spit you out, and make you shake hands with the devil. Probably.

Baker & Taylor
When hard-boiled, seventeen-year-old private investigator Dalton Rev transfers to Salt River High to solve the case of a dead student, he has his hands full trying to outwit the police, negotiate the school's social hierarchy, and get paid.

Welcome to Salt River High, where gang-like cliques run the school, teachers happily take bribes and roof top snipers keep the peace. Sean Beaudoin's You Killed Wesley Payne centers on Dalton Rev, a seventeen year old detective who transferred to Salt River to find out who killed Wesley Payne, a popular student found hanging from a goalpost on the football field. To solve this case, Dalton must wade into the murky world of high school politics while fending off the advances of the two ruling factions, the jocks and the rockers, who are happy to use their fists to make sure Dalton knows his place. As if this is not enough, Dalton must also contend with meddling teachers, misguided parents, a corrupt principal and an aggressive police force. Not to mention pretty girls and the hormonal urges they inspire.

You Killed Wesley Payne is modeled on the noir style of many great detective novels, with short, crisp sentences. This is a fast paced novel that is hard to put down. Beaudoin slyly incorporates a lot of the history taught in high school into twisted inside jokes. His hilarious slang glossary, included near the end of the book is a clever and imaginative must-read. The book’s one big weakness is that it may embrace the conventions of noir too thoroughly, resulting in underdeveloped female characters and limited moral reflection. Although it may target readers of hardboiled detective fiction, this novel will also appeal to fans of mysteries and thrillers and anyone who would appreciate a satire of high school culture. Recommended for ages 14 and up.

While this book is not normally the type I read, I found it was worthwhile and I enjoyed it. Very satirical about high school and teenagers in general with a good, strong plot that moves the story along very nicely.

Loved the stylized reality and over-the-top high school cliques. This story balanced empathy for the teenage experience with satirical commentary about it.

This book is about a teenage girls lust for power and domination in a high school hierarchy. It brings into detail all that she did to try to win position as the queen of Salt River High. Breaking up relationships, killing people and stealing, as well as making a mafia-like organisation selling teens' blood that makes you smarter. She only made one metaphorically fatal mistake. To rule the school, she needed the capital she stole but had somehow she had ironically misplaced or lost. she hires a private dick in the pretense that he was solving a homicide/ suicide but he ended up having to find $100,000. She tried to manipulate everyone to get it, even a life long acquaintance, delusional as he was. she didn't get it. it was sent to the Ukraine to make black market body armor for the soldiers in Afghanistan, including the private dick's brother. She ended up in jail for her crimes and the private dick started a new case. This book just shows that crime doesn't always pay and that you'll probably get caught in the end at the expense of others