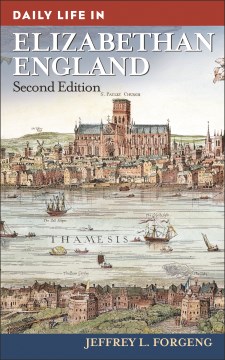 This book offers an experiential perspective on the lives of Elizabethans—how they worked, ate, and played—with hands-on examples that include authentic music, recipes, and games of the period.

This book offers an experiential perspective on the lives of Elizabethans—how they worked, ate, and played—with hands-on examples that include authentic music, recipes, and games of the period.

Daily Life in Elizabethan England: Second Edition offers a fresh look at Elizabethan life from the perspective of the people who actually lived it. With an abundance of updates based on the most current research, this second edition provides an engaging—and sometimes surprising—picture of what it was like to live during this distant time.

Readers will learn, for example, that Elizabethans were diligent recyclers, composting kitchen waste and collecting old rags for papermaking. They will discover that Elizabethans averaged less than 2 inches shorter than their modern British counterparts, and, in a surprising echo of our own age, that many Elizabethan city dwellers relied on carryout meals—albeit because they lacked kitchen facilities. What further sets the book apart is its "hands-on" approach to the past with the inclusion of actual music, games, recipes, and clothing patterns based on primary sources.

• Multiple primary-source sidebars in each chapter

Book News
Forgeng wrote the original volume as a reference for living history. Now a curator at the Higgins Armory Museum in Worcester, Massachusetts, he revises it in light of the research and writing he has done in the 12 years since, and to conform to the format and style of the series. His topics include society, households and the course of life, cycles of time, material culture, clothing and accouterments, food and drink, and entertainments. A chronology and a glossary are included, along with an appendix on how to throw an Elizabethan living history party. Annotation ©2010 Book News, Inc., Portland, OR (booknews.com)

The sort of history I enjoy: how people lived.