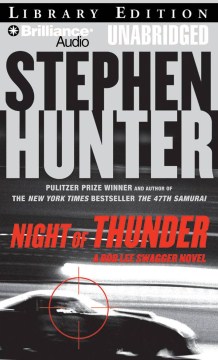 Baker & Taylor
A tale set against a backdrop of a week-long NASCAR event in the heart of Dixie finds Marine Corps master sniper Bob Lee Swagger facing off against an adversary known as Sinnerman while coping with corrupt police, meth dealers, and fanatical evangelicals.

Talk about a ride!

Woe unto he who crosses Bob Lee Swagger, especially when his daughter’s life is at stake. Forced off the road and into a crash that leaves her in a coma, clinging to life, reporter Nikki Swagger had begun to peel back the onion of a Southern-fried-conspiracy bubbling with all the angst, resentment, and dysfunction that Dixie gangsters can muster. An ancient, violent crime clan, a possibly corrupt law enforcement structure, gunmen of all stripes and shapes, and deranged evangelicals rear their ugly heads and will live to rue the day they targeted the wrong man’s daughter. It’s what you call your big-time bad career move. All of it is set against the backdrop of excitement and insanity that only a weeklong NASCAR event can bring to the backwoods of a town as seemingly sleepy as Bristol, Tennessee.

A master at the top of his game, Hunter provides a host of thrilling new reasons to listen as fast as we can. When Swagger picks up peeling where his daughter left off, and his swift sword of justice is let loose, we find a true American hero in his most stunning action to date. And—in the form of Brother Richard, a self-decreed “Sinnerman” out of the old fire-and-brimstone tradition—Hunter offers up his most diabolical, engaging villain yet. A triumph of story, character, and style, Night of Thunder is Stephen Hunter at his very best.

Baker
& Taylor
A tale set against a backdrop of a week-long NASCAR event in the heart of Dixie finds Marine Corps master sniper Lee Swagger facing off against an adversary known as Sinnerman, an effort that is compromised by corrupt police, meth dealers, and fanatical evangelicals. Simultaneous.

Stephen Hunter has written great novels like Point of Impact (movie the Shooter), 47th Samurai and Pale Horse Coming... Night of Thunder is not in that class, but is better than Havana. 5 of 10 stars at best.