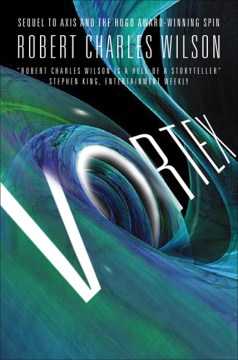 Baker & Taylor
Turk and his young friend Isaac Dvali are taken up by a community of fanatics who use them to enable a passage to the dying Earth, where they believe a prophecy of human/Hypothetical contact will be fulfilled.

Vortex tells the story of Turk Findley, the protagonist introduced in Axis, who is transported ten thousand years into the future by the mysterious entities called "the Hypotheticals." In this future humanity exists on a chain of planets connected by Hypothetical gateways; but Earth itself is a dying world, effectively quarantined.

Turk and his young friend Isaac Dvali are taken up by a community of fanatics who use them to enable a passage to the dying Earth, where they believe a prophecy of human/Hypothetical contact will be fulfilled. The prophecy is only partly true, however, and Turk must unravel the truth about the nature and purpose of the Hypotheticals before they carry him on a journey through warped time to the end of the universe itself.

Blackwell Publishing
Spin ended with the alien Hypotheticals setting a vast Arch over the Indian Ocean. Those who sailed under it found themselves on Equatoria, another planet entirely.

In Axis, a secretive Equatorian community of Fourths-humans who've had their lives extended by illegal Martian technology-raised a boy, Isaac Dvali, to communicate with the Hypotheticals. They built the same technology into Isaac that had, back on Earth, allowed Jason Lawton to make contact with the Hypotheticals, before it killed him. But Isaac's fate proved stranger. Interstellar clouds of tiny fragmented Hypothetical nanomachines rained down on Equatoria, and some of them began to grow. He and Turk Findley, a tough bush pilot and former drifter, were absorbed-the Fourths' word for it is "remembered"-by a vast concatenation of those growths.

Now Turk Findley has awakened ten thousand years later, to be collected by the people of Vox-an Equatorial' group that's obsessed with the Hypotheticals, and who evidently know the timing whereby the "remembered" will reappear. And they've been waiting for Turk and Isaac a very song time, be cause they think Turk and Isaac can tell them what the Hypotheticals are, what they want, and what they're going to do.

Turk Findley has no idea. Isaac may have an inkling but to the extent that he understands the Hypotheticals a galaxy-spanning network of self-replicating Von Neumann machines that "thinks" very, very slowly because its mental processes are limited by the speed of light over interstellar distances-he's as alien they are. But this is not what the people of Vox, under attack by the other nations of Equatoria, want to hear.

Meanwhile, the story of Turk Findley and Isaac Dvali among the people of Vox is being told in scrawled notebooks by a disturbed man being held in a hospital on Earth in the years immediately following the Spin.

This wrapped up the trilogy nicely. More exciting than Axis, though the science was not quite as captivating as that of Spin in my opinion (as a non-scientist). The relationship dynamics between a variety of characters make up for it - probably the best of the three books. The very end was actually quite beautiful and provided adequate closure for the epic ride that was this trilogy. Worth the read.

caitlinway thinks this title is suitable for 12 years and over