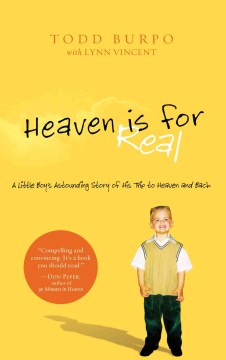 Heaven Is for Real

Gale / Cengage Learning
Heaven Is for Real is the true story of Colton Burpo, the four-year old son of a small town Nebraska pastor who, during emergency surgery, slips from consciousness and enters heaven. He survives and begins talking about being able to look down and see the doctor operating and his dad praying in the waiting room. Colton said he met his miscarried sister, whom no one had told him about, and his great grandfather who died 30 years before Colton was born, then shared impossible-to-know details about each. Told by his father, but often in Colton's own words, the disarmingly simple message is: heaven is a real place, Jesus really loves children, and be ready, there is a coming last battle.

Baker & Taylor
Presents the story of the four-year old son of a Nebraska pastor who during emergency surgery slips from consciousness and enters heaven.

Blackwell Publishing
Heaven Is for Real is the true story of Colton Burpo, the four-year-old son of a small-town Nebraska pastor. After surviving emergency surgery, he began talking about being able to look down and see the doctor operating and his dad praying in the waiting room. He also described being in heaven, seeing God, Jesus, and the Holy Spirit, and meeting long-dead family members. Told by the father, but often in Colton's own words, the disarmingly simple message of this book is that heaven is a real place, Jesus really loves children, and be ready, there is a coming last battle.

🧒 If you've ever wondered why children can't testify in court, you can find out right here.

Much better than the movie.

My problem with it was that it takes too long to "get to the point" and in regards to Colton's illness, some the information is TMI. Seriously how many times must we read about Colton "upchucking" ( wow, I hadn't seen that word since I was a kid!), throwing up, etc? Ugh... I don't recommend reading this while eating!

I was anxious to start reading about Colton being in Heaven. It was presented nicely on screen but I was disappointed in the way it was written. Just bits and pieces of Colton's account of being in Heaven, interspersed with Bible verses and a lot of references to religion.

Another thing about the writing.... I felt that it was geared more towards kids in some places, such as when Colton's MRI was described as him being put into a "big, scary machine".

Now I have to say that if you are uncomfortable with a lot of religious mentions, you won't like this book. I am a Christian so it didn't bother me.

What bothered me was that after a while Colton's story stated to seem kind of farfetched. I got to about Chapter 15 before I stopped reading. I'd seen the movie and frankly that was enough.

What drew me to this book is that I lost my husband on January 14th of 2019 and I guess I wanted to have a sense of what Heaven might be like. I've never felt so strongly about it until now but I don't really feel like I've "learned" anything.

Do I believe that Colton went to Heaven? Mostly yes. But I felt like his dad was kind of prodding him for information even though the Reverend insisted that he was trying to do the opposite.

Frankly even though I didn't really care for this book, I was appalled at the number of reviews that said that the Reverend wrote this book to exploit his son. I didn't get that impression at all. This is just a man who has been through a lot more than most who wanted to share his story with the world.

It's a small book but it was clearly written from the heart and it was so nice to read a story that was free from swear words. That in itself was a big plus.

That being said, I think I'll watch the movie again as soon as I can.

Heaven Is for Real - I enjoyed reading this book; the movie was well done also. Doctor-at-Bass-Fishing. T. Adams.

I read this book with an open mind and was curious about the fact that it was listed as a non-fiction. I thoroughly enjoyed this book and admit that it was a little slow in places. However, while one can think that a sick young boy simply had a dream that he visited Heaven, met Jesus, sat on his lap and was comforted, there are no explanations to explain who else Colton met in Heaven and what he saw back on earth from Heaven. Read the book first, the movie while nicely done did leave out a few details. I know three people that had out-of body experiences; if it has not happened to you it is too easy just to dismiss another person’s experience. Skeptics and non-Christians are entitled to their opinion, but in my opinion Heaven is for Real is highly recommended. Senior Doctor-at-Bass! D. A.

Heavens for real is about meeting God in heaven. I enjoy reading this book.

When I first heard about Heaven Is For Real, I thought it would be two hundred pages of some author quoting passages from the bible and trying to strengthen my belief in Jesus, but then I saw it on a shelf in a store, read the first few pages, bought it, and finished it in the same day.
Heaven Is For Real is a true story about a little boy named Colton Burpo, who ends up in the hospital after being sick for quite a while. He claims to have visited Heaven while he was asleep during the surgery. The things that he tells people he witnessed gives them different feelings: hope, fear, concern, joy.
Together, him and his family conquer problems and create new ones, and it's all very entertaining to read about. The end of each chapter gave me more questions than answers, and I couldn't stop reading until the end.
Of course, like any other book, it has its parts that you'd rather just skip over due to boredom , but in the end, it's a very well written book that leaves you thinking about the characters weeks after you finish reading.
I suggest Heaven Is For Real to anybody who enjoys reading books that fill you with inspiration and wonder. Everyone that I've recommended this book to loved it as much as I did, and all of them have a different taste in books.
Also, after you read this novel, don't bother with the movie. It leaves out so much of the actual book it will only disappoint and frustrate you.

You have to read through a lot of useless material to weed out anything of interest. Chapters devoted to going to a creepy insect show which is of no significance whatsoever. Very little substance when you consider that what this young boy experienced is extraordinary. Skip this drivel and read something from Dr. Moody and others on Near Death Experiences.

gems thinks this title is suitable for 13 years and over

orange_rabbit_82 thinks this title is suitable for 20 years and over

navy_falcon_67 thinks this title is suitable for All Ages

blue_horse_1094 thinks this title is suitable for All Ages

tonging thinks this title is suitable for All Ages

yellow_dog_1757 thinks this title is suitable for All Ages

orange_zebra_194 thinks this title is suitable for 13 years and over

andryjay thinks this title is suitable for 12 years and over

cwhite16 thinks this title is suitable for 10 years and over

mkastar thinks this title is suitable for 12 years and over

"In heaven, this little girl ran up to me, and she wouldn't stop hugging me," - Colton met his sister in heaven where the family lost of a miscarriage.

"I asked them to sing "We Will, We Will Rock You" but they wouldn't sing that."

-Colton talking about what song the angels sang in heaven

"It doesn't get dark in heaven, Jesus is the light"

This is a mind blowing book.

As you read you get a glimpse at what is truly Heaven, what is truly Paradise.
The journey that this little boy takes, will have you hanging on to his every word, his every breath, as you hunger for more.
The simple way he puts things, makes it possible for everyone to see what is beyond the drab world that we live in today.
It gives hope to all who are hopeless.
Faith to all who lack faith.
It is simply a real-life experience put into words that will teach you about what God is like, and how much he really loves us.

Other: This will change your life! An amazing and perspective-changing story!