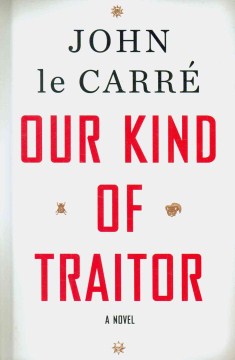 Our Kind of Traitor

Baker & Taylor
In the wake of the collapse of Lehman Brothers and with Britain on the brink of economic ruin, a young English couple takes a tennis vacation in Antigua. There they meet Dima, a Russian who styles himself the world's number one money launderer, who wants, among other things, a game of tennis. Back in London, the couple is subjected to an all-night interrogation by the British Secret Service, which also needs their help. Their acquiescence will lead them on a precarious journey through Paris to a safe house in Switzerland, helpless pawns in a game of nations that reveals the unholy alliances between the Russian mafia, the City of London, the government and the competing factions of the British Secret Service.

Not at all impressed with this one. I found it hard to follow. The ending leaves much to be desired. Legacy of Spies is better

Update: I would recommend reading investigative journalist Heidi Blake's piece - - From Russia With Blood - - at Buzzfeed. Along the lines of this book, but much shorter, and much much more interesting [no reflection on the author]. Then dig up an old copy of either the Wall Street Journal or NY Times from the 1980s, to seek out articles on the mysterious murders/deaths of a bunch of British engineers and scientists working on the old Star Wars program [contracted out from the US government's Strategic Defense Initiative]. Amazing similarity: but today Vladimir Putin is running Russia, whereas in the 1980s Putin was leading those assassination squads in the U.K. when Putin was part of their KGB.

After bowled over by the movie adapted from this book, decided to give it another go. Well, the book is still hard to read; characters less lively and charismatic; events less thrilling (e.g. unsatisfied closure as the very clever one in the film.) Original review: jimg2000 Feb 08, 2011

I gave up after reading about 100 pages, about 1/3 of the book. TOo much fluffy meaningless "stuff" that are not clever or relation to the plot. Bad! BTW, I had read most of le Carre's books and they were good...wonder if this one is written by an 3rd rated ghost writer as le Carre must be getting real old to write.

It's Le Carre but not at his best.

Very disappointing. I was bored with the characters after a chapter or so. Cannot compare with the Smiley novels which take a grip from the first page.

One of the less linear books I've read. Written with every detail, like if you plugged a computer into the character's head and everything got written down. Honestly really enjoyed it's style, gave depth to the characters in a way the movie never could. Some confusing stuff if you're not familiar with mafia, government, spy lingo.

In Antigua for a vacation, former Oxford don Perry Makepiece and his girlfriend Gail are befriended by a Russian gangster named Dima, who wants them to help him escape an increasingly dangerous criminal underworld. But Dima, a big-time money launderer, knows a lot about which international financiers are above board -- and which are not -- and MI5 is mighty interested in him. Advised by operatives, Perry begins liaising with Dima, but it seems as if everyone has a slightly different agenda. This tale of treachery, infighting, and the trail of money is a "chamber symphony of exquisite delicacy" (Kirkus Reviews).

I agree with commenter rab1953 below: the book is entirely too close to real life or reality, but not quite as nefarious in scope nor as interesting. After this was published, the publicity hit about HSBC's gargantuan money laundering for several drug cartels (the British FSA estimated almost one-half trillion dollars per year [translated from British pounds] for about ten years, or around $5 trillion worth of money laundering, and that's just one "venerable bank" in the UK).

I found this one a bit disappointing. It's got all the le Carre touches, in a very contemporary setting, but somehow it just didn't click for me. I'm not sure if it's just me or something in the book. The style is distant and very cool. It's slow-moving as le Carre often is. The characters are complex, and not always convincing. The story line didn't hook me in, and I was tired of it before I was half way through. The ending comes with le Carre's usual crash (not to give anything away). Nothing new here for le Carre except the contemporary setting, and even run-of-the-mill le Carre is not bad, but perhaps I just wanted more.

The husband and wife, not the images of Ewan McGregor and Naomie Harris in the film:
Perry and Gail made a strikingly attractive pair. Nature had provided Gail with long, shapely legs and arms, high, small breasts, a lissom body, English skin, fine gold hair and a smile to light the gloomiest corners of life. Perry had a different sort of Englishness, being lank and at first sight dislocated, with a long neck and prominent Adam’s apple. His stride was ungainly, he seemed to topple and his ears protruded. At his State school he had been awarded the nickname of Giraffe, until those unwise enough to use it learned their lesson. But with manhood he had acquired—unconsciously, which only made it more impressive-a precarious but undoubted grace. He had a mop of brown curls, a wide, freckled forehead, and large, bespectacled eyes that gave out an air of angelic perplexity.

Perry the closet sybarite who treated himself to unpredictable bursts of luxury before hurrying back to his garret.
===
‘I’ll do it for Dima. I’ll even do it for you people. But I’ll do it alone or not at all.’
===
Luke has long ago given up trying to judge the world by its face. He has studied these faces numberless times, but still finds nothing in them he wouldn’t find across the desk from him in any Hampstead estate agent’s office, or in any gathering of black-suited, black-brief-cased, business types in the bar of any smart hotel from Moscow to Bogotá.

‘You’re on record as believing that our green and pleasant land is in dire need of saving from itself. I happen to share that opinion. I’ve studied the disease, I’ve lived in the swamp. It is my informed conclusion that we are suffering, as an ex-great nation, from top-down corporate rot. And that’s not just the judgement of an ailing old fart. A lot of people in my Service make a profession of not seeing things in black and white. Do not confuse me with them. I’m a late-onset, red-toothed radical with balls. Still with me?’

He went to bed, turned on the BBC World News and switched it off again. Half-truths. Quarter-truths.
===
Aubrey Longrigg was balding, mean and beaky, as became a man famous for his intolerance of lesser minds than his own. Under the Adriatic sun, his unappetizing features have turned a flaming pink, and the rimless spectacles do little to alter the impression of a fifty-year-old bank clerk—unless, like Luke, you have heard tales of the restless ambition that drives him, the unforgiving intellect that had made the fourth floor a swirling hothouse of innovative ideas and feuding barons, and of his improbable attraction to a certain kind of woman—the kind presumably that gets a kick out of being intellectually belittled—

Why on earth a former official from the British Embassy in Bogotá should have been sharing the plane of a ‘dubious Russian Swiss-based minigarch’, even the red-top press was at a loss to explain. Was it sex? Was it drugs? Was it arms? For want of a shred of evidence it was none of them. Terror, the great catch-all these days, has also been considered, but rejected out of hand. No group has claimed responsibility.
===
Delving in her handbag, she unearthed her passport and the tickets and gave them to the uniformed policeman, who examined them with that extra slowness that policemen all over the world are taught to exhibit in order to raise the stress level of honest citizens.
===
The Service was his mother and father and his bit of God as well, even if its ways were sometimes imponderable.

Stage actress & pro Palestinian Charlie is recruited by the Israelis to pose as a Palestinian terrorist. Gripping narrative.

While on a romantic getaway in Antigua, couple Perry and Gail meet a Russian businessman who calls himself Dima, and his family. After a game of tennis, Dima, out of the blue asks Perry to talk to British Secret Services at him wiling to trade Russian mafia secrets in exchange for sanctuary for him and his family in England. He also says that he's the "world's best money launderer." After Perry gives this information to the Secret Service, they suddenly hire him and Gail to go undercover and meet Dima again in order to get more information on Dima's life and business. This is something that will take the couple from Lonson, to Paris, to Switzerland. How far will Perry and Gail go to get these answers. The only easy thing they know about this task is the main rule: be innocent. Pbbbtt, for these two, not a problem!

helenhag1217 thinks this title is suitable for 17 years and over