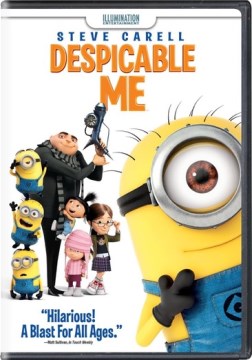 Undoubtedly the best Despicable Me movie. It's classic and funny, and the movie doesn't solely rely on crude humor to bring a laugh. I think it's good for all audiences.

Heartwarming and lovable. The best of all three Despicable Me movies. 💙

This series of movies (1,2,3) are hysterical...the genius is to include dark, non-polite, smarter humor that appeals to us parents as well (perfect combination of the US and French side of Illumination pics maybe?). The Minions are so much fun...

1 and 2 are an experience to be shared with all... 3 is a bit too much with the battles and explosions... the minions mini movies are worth watching as well...

Funny, and inappropriate. The minions speak a hilarious, French, Spanish, English, and Jibberish all mashed together.

I liked this DVD. If you like cartoons, you may like this story. There is the threat of violence; but, it does not happen. The main character is purposely doing bad things to hurt others. The children convert him to being nice and loving. He becomes transformed to work for the good side against the bad elements. There is some reference to the old story "Annie". A bald guy that does not like kids adopts a child. The indifferent male finds love in his heart for the child. No sex scenes to worry about. It is good for all ages.

"Despicable Me" is a movie that has an important lesson in it. It reminds me of the idiom “Don't judge a book a the cover” because even though Gru is considered a villain, he ends up showing the kind part of him. He becomes sweet and has a good heart. This movie shows how important family is by Gru making his daughters his first priority. The minions are super cute, funny, and even helpful sometimes. “Despicable Me” is very entertaining and it will definitely make you laugh. This is a good movie for kids to watch because I believe that they will find it very interesting. I would rate this movie a 4/5. @TheBookieReadingMonster of the Teen Review Board at the Hamilton Public Library

This movie shows that even the toughest of villains still have a soft heart. Super villain Gru has decided that he plans to steal the moon, and enlists his band of yellow minions to help him get the job done. However, when three young orphan girls force their way into his life and make him their dad, his mind begins to change. The combination of funny minions and the outrageousness of Gru, make this movie interesting as he develops from a villain into a loving and caring father. Although annoying at times, this movie is sweet and shows the importance of family. I would rate this film 4/5 stars and recommend it for a family movie night at home.
@The_Reviewer of the Teen Review Board at the Hamilton Public Library

Despicable Me is the 1st movie in the Despicable Me series. This is a very nice and funny movie. I love the whole plot and theme of the story. Gru starts off as a lonely, grumpy and wicked super-villain , but by the end of the movie he is a kind-hearted and sweet man, who loves his little girls. The movie is based Gru who is surrounded by an army of little yellow minions and his impenetrable arsenal of weapons and war machines, Gru makes ready to vanquish all who stand in his way. But nothing in his calculations and groundwork has prepared him for his greatest challenge: three adorable orphan girls who want to make him their dad. This movie has a funny and nice relationship between Gru and his little girls. Overall, this is a great movie and you should definitely watch the movie. 5/5. @TheBookWorm of the Hamilton Public Library Teen Review Board

This movie is banana gold when it comes to good content to watch! Despicable Me is full of heart warming events, and ridiculously hillarious slapstick comedy. For example, how Gru repeateldy smashed the two cars in front of him when he was parking his Gru Mobile, to the point where he had more then enough space, and the cars were crushed, and when Margo excpeted Gru to be her adopeted father, and gave him a hug saying "I love you," when she previously said she hated him in the beginning in the movie! Those were funny and heart warming scenes, and their is plenty more where those two came from. The minions were also great comic relief, when in futre movies they have a more bigger spotlight, the movie kept them more contemporary, making it easier for the audience to swllow all the hillarity they bring. But the reason I picked this movie over the second one, is because there is something I must complain about. When Gru was getting humoroulsy injured with missles, a shark, and several falls to the ground, were a bit hard to dispand my dissbelief that he could survive all that. It may have been better if the producers went a little lighter on the injuries, making them both funny, and realistically livable from. But besides that, Despicable Me is an amazing watch, and I highly recommned it! 4/5
@BooksRUs of the Teen Review Board at the Hamilton Public Library

I was not expecting to like this. I found myself rooting for the bad guy.
No idea how much kids like it, but I loved it. :-)
Definitely recommend it.

For a kids movie, it was good, need more laughter i think, but i liked it.

Alanreviews thinks this title is suitable for All Ages

yinlanglang thinks this title is suitable for 99 years and over

emrong thinks this title is suitable for All Ages

lilmisslibrary thinks this title is suitable for 4 years and over

violet_butterfly_7711 thinks this title is suitable for All Ages

beckythecat1 thinks this title is suitable for 10 years and under

indigo_nightingale_26 thinks this title is suitable for All Ages

green_snake_657 thinks this title is suitable for All Ages

Agnes: Will you read us a bedtime story?

Gru: The physical appearance of the please makes no difference.

"You poked a hole in my juice box." -Edith

Agnes: ITS SO FLUFFY

Edith: "Can I drink this?"
Doctor Nafario: "Would you like to explode!?"
(She kicks him in the shin)

Little girl: "It was you cousins idea!" Minion: Whaaaaat?!?!?

Dr. Nefario: Here's the new weapon you ordered.
[Shoots minion with the fart gun]
Gru: No, no, no. I said DART gun.
Dr. Nefario: Oh yes. Cause I was wondering... under what circumstances would we use this?
Gru: Ok...

Other: just take it as a challenge where you can't smile or laugh ( yes, its that funny)

Other: You will die (Of laughter)

Despicable me is a film when a evil mastermind wants to steal the moon. He adopts 3 girls and they change his personality. With the help of his minions, the professer and the 3 chidren they help stop vector another evil mastermind. This movie is a very funny movie and also for the whole family to watch. Enjoy ^_^

if you want to enjoy and laugh to the fullest, watch this.

A very cute and funny story. I must admit that's 2 for Rachel. would have been 3 ,but I didn't like Zoolander.

When a criminal mastermind uses a trio of orphan girls as pawns for a grand scheme, he finds their love is profoundly changing him for the better.